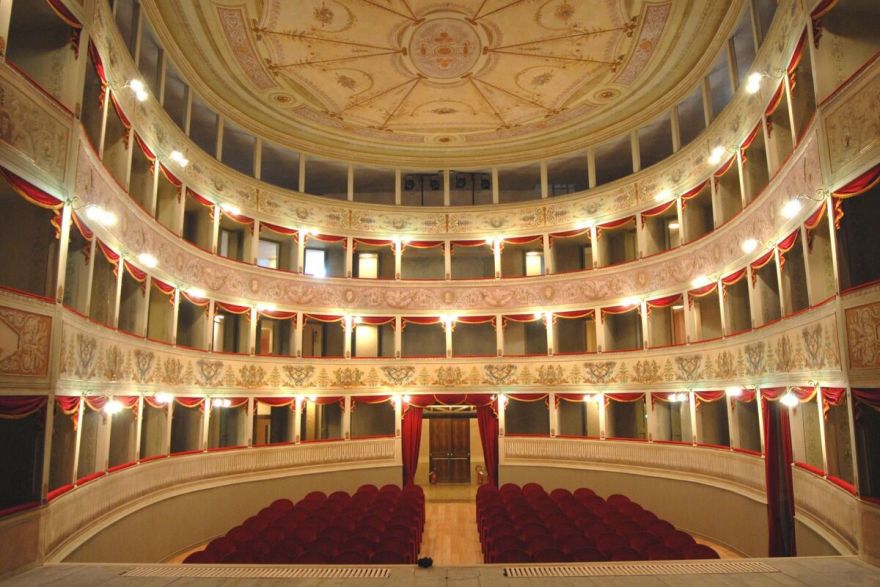 The sixteenth-century Palace of the Region, in Piazza Maggiore in Feltre, contains within it a jewel with almost perfect acoustics: the Teatro della Sena. Since 1684, the year of its debut as a public theatre, the "Sena" knows its period of maximum splendour in the early eighteenth century, ennobled by the temporary presence of a young Carlo Goldoni that between 1729 and 1730 gives to the citizenship the premiere of 2 intermezzos for 3 voices: "Il buon vecchio" and "La cantatrice".
After a long period of abandonment (which, unfortunately, would not be the last), the theatre of the Sena was born to new life in 1813 thanks to the work of the Venetian architect Gian Antonio Selva, already the creator of the theatre "La Fenice" and "Teatro Nuovo". The decorations, including the original curtain restored in 2019, were entrusted to Tranquillo Orsi, who had previously dealt, with great skill, with those of the Venetian Fenice.
Thanks to the extraordinary work of these 2 artists, the Teatro della Sena is also known to fans by the flattering nickname of "Little Phoenix".

Tagged under :
Tweet
More in this category: Military memorial of mount Grappa

What are you looking for? browse using keywords

Contact us Send us an email or call us!

Send us an email